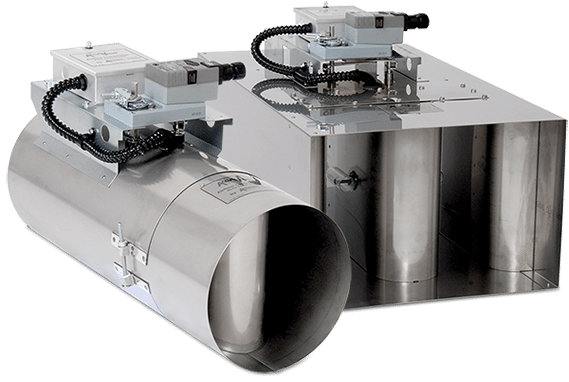 The AccuValve is an electronically operated airflow control valve for critical environments such as laboratories and clean rooms. The AccuValve is designed for 21st Century sustainable building control incorporating high accuracy airflow sensing with a revolutionary design based upon proven technologies. Downloads
AVC2000 Product Sheet
AVC2000 Submittal
Which AccuValve is right for you?

Answers to Your AccuValve Questions

Why is a low pressure drop airflow valve important to me?

A low pressure drop airflow valve can mean significant savings in operating costs over the life of the building. Using an airflow‐based valve instead of a mechanical pressure‐based valve can reduce duct static pressures by greater than 1.0″ wc. This will result in fans running at lower brake horsepower and can mean savings of over $425,000.00 over a 20-year life of a building with 100,000 CFM of exhaust.

It's the 21st century – why would I want to use a mechanical pressure‐based valve in a critical environment application like a laboratory?

The short answer is that there is no longer a good reason to use a 40‐year‐old mechanical design like a venturi valve with higher operating pressure requirements in your critical environment application.

When VAV control of laboratories was first being installed, a mechanical device such as a venturi valve had advantages over closed loop control due to limitations of airflow sensing and the high cost of digital controls with the required scan rates to accomplish the speed of response required for this application.

As with any industry many improvements have been made which has rendered mechanical open loop control an outdated method of control of a critical environment system. Some of these improvements are:

Airflow Sensing – Venturi suppliers state that airflow measurement is not reliable or that it does not have the turndown required in a laboratory environment. While 25 years ago with only pitot and orifice plates available this had some validity, however the introduction of digital vortex shedding airflow sensors has eliminated this concern. Offering high accuracy, large turndowns and resistance to harsh environments, the vortex shedding airflow sensor is ideally suited for critical airflow control applications.

Speed of Response – One positive of an open loop mechanical system was the high speed of response and 25 years ago it could not be matched by the digital controllers in a cost‐effective way. With the ever‐improving speed and lower cost of microprocessors this has also become a nonissue for closed loop systems which now offer superior performance and reliability to a mechanical pressure independent system.

Nonlinear Damper– 25 years ago, the venturi was compared to a single blade damper. The single blade damper has a very limited turndown because of the inherent nonlinear action of the device. In 2006 the AccuValve was introduced which by using a dual chamber system with linearizing linkage it eliminated the hunting associated with a single blade damper allowing for much faster control action which is stable over a much wider range.

Why does the AccuValve operate at significantly lower duct pressures than a venturi valve?

What is the difference between a pressure‐based valve and airflow‐based valve?

An airflow‐based valve such as an AccuValve does not require pressure in the system to operate. Instead it measures airflow directly and will drive the valve blades to achieve the required airflow regardless of the pressure in the system. In the event there is not sufficient pressure in the duct to achieve the required airflow it will read low airflow and an alarm will occur. The AccuValve is specified with a recommended maximum pressure drop of 0.3″ for energy efficiency with the most energy efficient design between 0.1″ and 0.2″. The AccuValve provides control up to a maximum pressure drop of 0.45″ when required.

For example: A venturi is specified to operate between 0.6″ to 3.0″ wc. Venturi airflow valve manufacturers offer a lower pressure alternative 0.3″ to 3.0″ wc, but beware that to do so, the calibration of the spring changes thereby reducing the overall airflow range of the valve. This does not mean that it has a 0.3″ or 0.6″ pressure drop – instead it means that it requires a minimum pressure of 0.3″ or 0.6″ to operate. A venturi valve based ”system“ typically requires 1.5″ to 2.0″ of system pressure to insure its pressure independence.

I am controlling airflow, so why wouldn't I want to measure airflow?

A very good question. We have always believed that if a parameter is important you should measure it. Over thirty years ago, when laboratory VAV controls were in their infancy, the airflow technology to reliably measure CFM in the harsh environments of laboratories were limited and expensive. Vortex shedding airflow measurement overcame the technical as well as the cost issues and there is no longer a reason not to measure airflow. It is by far the safest way to control airflow in any critical environment. Bottom line – to control temperature, you measure temperature; to control humidity, you measure humidity, therefore we feel it is important to measure airflow, which of course is the most critical parameter.

Why is it important to an owner to have Demand Based Static Pressure Reset Control in labs?

Laboratories are generally the largest users of energy in any facility. Whether in a pharmaceutical research facility or a university research facility, laboratories use much larger amounts of energy than other operations. The industry has looked at ways to save on energy use by using VAV fume hood control systems as well as low flow fume hoods. These systems took a big bite out of energy use in labs. In continuing efforts to reduce energy costs and make buildings “greener” and sustainable, I2SL (formerly Labs21) has recommended reducing the static pressure drop of the devices in the airstream for both supply and exhaust systems in labs. ASHRAE Standard 90.1.‐6.5.3.2.3 addresses this issue to which the AccuValve design has incorporated its capabilities. Demand Based Static Pressure Reset Control (DBSPRC) offers dramatic savings in operating cost by minimizing the static pressure in the duct thereby allowing the supply and exhaust fans to operate at lower brake horsepower. To utilize DBSPRC the airflow valve must incorporate airflow measurement and closed loop control. Through the measurement of true airflow, the valve will modulate to the proper airflow volume. This will occur regardless of the static pressure in the duct. Information on the valve position will then be communicated to the Building Management System which will use that information to reset the static pressure in the duct to the minimum setpoint possible to maximize energy savings. An open loop mechanical venturi valve is not acceptable because it relies on a calibrated spring and plunger which only drives to a specific valve position and relies on the spring to compensate for pressure changes. Therefore, valve position is not indicative of required static pressure in the system and a venturi valve cannot be used for DBSPRC.

Has the AccuValve been recognized within the industry with any special awards?

Yes, the AccuValve has been awarded “Winner” of the ASHRAE AHR Innovation Award for value, impact to the industry and application two times. First for the valve itself and again for the fume hood control system incorporating the Insight user interface. The AccuValve was designed to be a sustainable product from its inception. Its innovative features and benefits pulled the industry forward into the 21st century with a product that’s designed for ease of layout, installation and operation with no recalibration and maintenance requirements.

Does the AccuValve require straight runs before and after the airflow control valve to properly measure airflow?

No. The AccuValve does not require any additional straight duct run either before or after the airflow valve to measure airflow. The AccuValve incorporates a compression section in the inlet of the valve producing a uniform velocity profile for the airflow sensors without the need for straight duct into or out of the valve. Therefore, if needed, the AccuValve can also be mounted where there is no straight run available and meet the specified accuracy for airflow measurement.

Can the AccuValve be mounted in any position or is it required to be ordered and mounted in a specific horizontal or vertical arrangement as is required for a venturi airflow valve?

The AccuValve can be mounted in any position on a 360° plane. Since it directly measures airflow and is not factory calibrated with a mechanical cone/spring arrangement (such as a venturi valve), all valves can easily be installed in any orientation as required by the project. All venturi valves require the valve to be ordered and installed in an exact vertical or horizontal arrangement to meet the factory mechanical calibration specifications.

Does the actuator/controller require specific installation to ensure operation?

No. Unlike the venturi valve, the AccuValve can be installed with the controls accessible from underneath (at 6:00 position).

Can the AccuValve be provided in 304SS and 316SS to match typical exhaust ductwork?

Yes. The AccuValve housing material is designed to match the associated ductwork for corrosive applications.

Can the AccuValve be provided with Electronic Pressure Independence?

Yes. The AccuValve AVC model is electronically pressure independent. The AVC is designed with an integral closed‐loop feedback controller. Airflow measurement through the vortex airflow sensor provides a digital signal to the controller which modulates the electric actuator to maintain desired airflow setpoint.

Is the AccuValve provided with BACnet MS/TP? 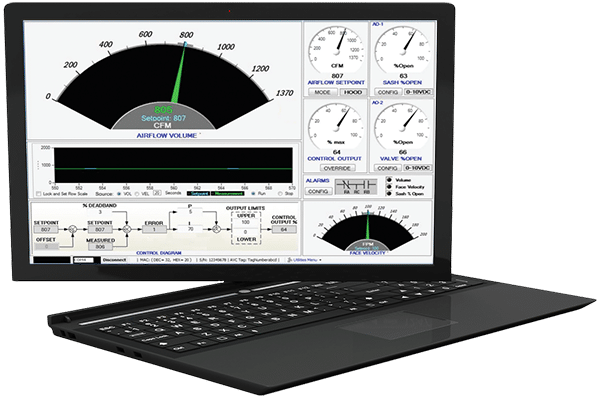 All AccuValve models incorporate a simple and intuitive graphical user interface, which enables the user to configure the valve for their specific requirements. Accutrol's Insight software, provided free of charge, insures that the owner is not required to contact the manufacturer of the airflow control system when changes are required in the field.